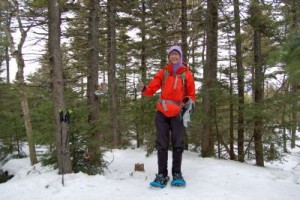 We hiked Rocky via the slightly less traditional route of an out and back from Moon Haw Road. Passing over Balsam Cap in both directions was a nice addition, but Rocky was the prime objective for this hike because it was G’s 35th for her winter round.

The day was chilly and very windy with occasional light snow showers. Especially lower on the mountain you could approaching wind gusts before they reached you. Up high, the trees are smaller and more densely packed and the wind wasn’t much of an issue at all although there was a little blowing snow at times.

We started out on the woods road across from the parking at the end of Moon Haw. When we got to the junction where we could go right and do a little more side hilling or stay left and head on a more direct bearing towards the Friday ridgeline closer to where there is private property, we elected to follow the well-developed snowshoe track to the left.

We wore snow shoes right from the parking area and kept them on all day. The beaten track was fairly firm in the morning, but if you stepped just slightly off of it, down you went into deep snow. After a while the track was heading south of west and in my judgement towards private property so we headed off the track to the right and broke our own trail for a while slightly side-hilling rather than heading straight up to the ridge. It was more work in the deep snow but we had all anticipated a good workout, with the more difficult terrain on the segment past Balsam Cap.

Ultimately, we joined back with the herd path just above the cabin and it was a super-highway from there to Balsam Cap. At one point, someone had sawed a blowdown off of the herd path; a bit disheartening on a trail-less peak. When we reached the Balsam Cap viewpoint it was snowing and there wasn’t anything to see.

After a brief snack at the 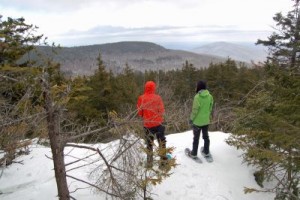 Balsam Cap canister, we started for Rocky and were blessed with a solidly packed track all the way to Rocky. So much for that being the more difficult segment. However, there were a couple of tricky ledges and some thick firs to contend with and we did collect some scratches. In the col between BC and Rocky, we met a couple of hikers who had come from the opposite direction (Denning).

After a little chat, we resumed and started up Rocky. We hiked past a beautiful gap under a big ledge that we first encountered last fall and near a wall reminiscent of the one on Friday. In spots we could see where the hikers we had just met had branched out and broken their own trail, but we stayed with the old track that had served us so well. The track was mostly but not always visually obvious and was fairly easy to stay on. If you went off of it, the feedback was instantaneous. 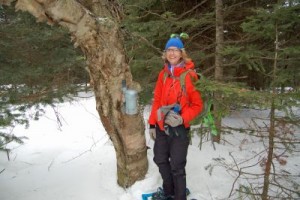 Although not as tough as we had expected, the segment from Balsam Cap down to the col with Rocky was indeed tougher and longer than the next segment up Rocky. Despite some tricky negotiation up a couple of ledges it seemed we were on the summit of Rocky very quickly. We celebrated G’s finish with some apple pie (will leave it to your imagination which kind) and presented G with her winter rocker. Next we headed off to the viewpoint which was remarkably wind free and a great place for lunch and there was even pretty good visibility. 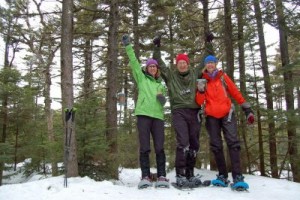 The hike back to Balsam Cap seemed to go much faster, although each direction took us about an hour and 15 minutes. Back on the Balsam Cap summit we met another group of 3 working on squeezing in a few last winter peaks. We had another snack, finished the apple pie, and modeled the latest in summit headgear (possibly stolen from a Dr. Seuss character). 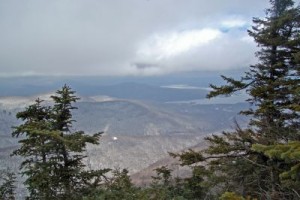 good except for around the summits of Cornell and Wittenberg which were in and out of swiftly moving clouds. From the viewpoint the rest of the hike home went quickly. Parts of the trail had slightly blown in since the morning which made for some of the quietest snow shoeing of the day. Below the traditional jump off point for Friday the snow became softer and softer to the point where we were sinking a bit (with our snowshoes on) in sections that had supported our weight earlier in the day. This wasn’t much of a problem going downhill and we made it from Balsam Cap back to the cars in about an hour and 45 minutes.

After that we all celebrated G’s winter finish at Brios in Phoenicia.