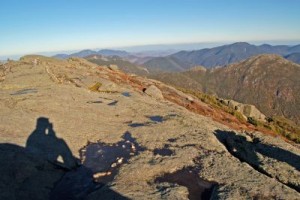 I led our small group on a hike of Gray, Skylight and Marcy starting and ending at the Adirondack Loj. We did a loop of sorts via Lake Arnold / Feldspar up to Four Corners over Marcy and back to the Loj via Van Hoevenberg.

The weather was fantastic, although the trails were icy in spots above about 4000 feet.

We made quick time up to Marcy Dam and then took the trail towards Avalanche Lake before switching to the Lake Arnold Trail. The trail steepens until a little past the bridge near Lake Arnold then begins a long gradual descent towards the Feldspar brook.

Past Lake Arnold we crossed paths with a ranger who warned us that she had submerged over her ankles while crossing the floating bog bridges that lay ahead. She wasn’t kidding. I teetered on the brink, partially submerged one leg, but otherwise got through reasonably dry. One of our group wasn’t as lucky.

We made a quick stop by the Feldspar campsites to wring out socks and visit the privy, and then started up towards Four Corners. We started to see some ice and also patches of snow on the sides of the trail, but nothing that required any traction aids.

The herd path to Gray Peak at the outlet for Lake Tear of the Clouds was easy to spot. There was a guy sitting on a sunny rock in the outlet waiting for his friends to return from bagging Gray.

The Gray herd path was easy to follow, but definitely the roughest section of trail that 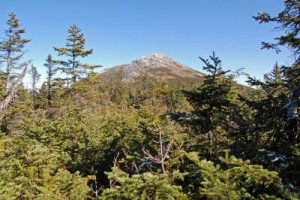 we were on all day. One of us had an unexpected slide down an icy rock face ending  on his feet in soft mud at the bottom. The rest of us found a secondary herd path after witnessing that. There were a few other tricky short scrambles along with plenty of mud and roots before we got to a great overlook close to the actual summit. This climb requires considerable exertion for a short 600 foot ascent.  There are some great views of Marcy from Gray.

We left Gray the same way we came, and then headed up to Four Corners where we crossed paths with a group coming off of Skylight. The last guy in that group was c 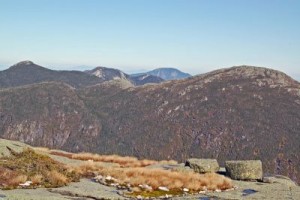 arrying nothing but a Subway sandwich in a plastic bag and complaining that his
friends weren’t stopping to rest at the trail junction.

Our next stop was Skylight. The trail to Skylight had increasing amounts of ice on it until shortly before the summit, but we carefully picked our way around it. The summit views were again spectacular and we took plenty of photos.

After returning to four corners, the hike up Marcy was straight-forward, but steep. The 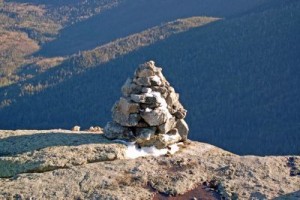 amount of steep slab getting up to the summit once you reach the Schofield cobble is impressive. Once on the summit, we lingered a while despite the chilly temperatures. The visibility and the afternoon lighting were excellent, so I went a little camera happy.

Coming off of Marcy on the north
side we encountered considerable ice. Three of us finally broke down and put on our microspikes. It wasn’t a pleasant choice because there was still more bare rock than ice to walk across, but it was necessary. We passed a couple of girls moving slowly who commented that the spikes looked like a very smart idea. I took my spikes off a wee bit too early which turned out to be not as smart an idea. I did an interesting pirouette down a stray icy rock. No harm was done and I’m told it looked pretty cool, but still it’s a cautionary tale about being stingy with the traction aids. When in doubt, wear the spikes. It was our goal to get to some easier hiking before dark and we accomplished that, switching on the headlamps near Indian Falls.

Nearing the Phelps Trail we started hearing a lot of noise which turned out to be a group of a half dozen young men and women moving very slowly with only one weak light among them and yelling loudly in French “to keep the bears away”. They asked if they could follow us, but they wanted to keep heading to Meadows Road where they started and we were heading to the Loj, so instead we loaned them a couple of spare headlamps and asked that they return them to the Loj when they were done. From speaking with them, it was clear that they weren’t lost and knew where they had to go, but as a group they were quite frazzled. They did return the headlamps to the ADK staff at the HPIC with whom we had left our mailing addresses (and postage). They were back in our possession a few days later. They told the staff we had saved their lives. Gratuitously over-dramatic, but a good reminder of another lesson; never go out without a headlamp (actually two, and spare batteries) on any hike, including a day hike.

From there it was a nice easy hike back to the Loj in the dark. We signed out a little before 8:30. The hike totaled about 18 miles and 5200 feet of elevation gain. A long but satisfying day.