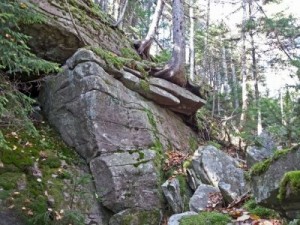 This hike was a great workout and a nice dry run for hiking “the nine” one day, not to mention bagging 6 separate peaks for those who were working a list. The route was a through hike and we spotted cars at Moon Haw and Peekamoose Roads. The weather for this hike was beautiful, especially compared to the prior day when I had hiked Rusk in the rain with a friend. It does sometimes rain in the mountains.

Our intent was to initially follow a traditional route of an old logging road that side hills
gently to the right of the main ridge up Friday from Moonhaw. However, encouraged by one of the many woods roads that branches off the one we were following, we turned a little too soon and headed right up the ridge. We hadn’t been checking the compass frequently enough and were instead following the old roads. There is private property and a nice cabin on that part of the ridge and when we recognized it up ahead, we retreated back to the right and down climbed a bit into the woods hoping to stay away from the private property. No harm done, but that’s what happens in the back country when you get a little lazy.

Safely past the private property, we set a new bearing and followed it quickly picking a noticeable herd path which seemed even better defined than it had the last time I was on Friday. Despite this we lost the path frequently, but staying on our bearing always brought us back to it. The compass doesn’t lie.

We didn’t notice a tree with a large burl (the “pregnant tree”) that is the usual landmark for a turnoff towards the Friday summit. Rather than back tracking we set a bearing towards the north hoping to come across the herd path near the base of the substantial cliff band known as the Friday “wall”, but as the rocks got higher there was more and more blow down making the going tougher. Seeing a reasonable cut 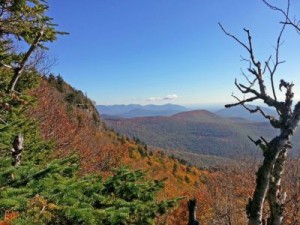 up through the rocks, we took it and then hiked towards Friday on top of the wall instead of below it. This chewed up some extra time on a long day but was otherwise quite a nice variation. We passed a couple of excellent lookouts before reaching Hermits Ledge and from there it was relatively straight forward following existing paths to the summit. The views and colors from the ledges were awesome.

Friday was only the first of six summits for the day, but by itself it is one of the best workouts getting to a single peak in the Catskills. From the parking area it ascends more than 2500 feet and accounted for most of the elevation gain on this day.

From the Friday summit can, we headed out towards Balsam Cap, this time sticking to the herd paths and verifying that the pregnant tree is still there. Except in a couple of spots, the path to Balsam is well worn and very easy to follow.
From Balsam Cap to Rocky is fairly straight-forward, but a little longer and lacking such an obvious herdpath. On the way up Rocky we passed some very nice rock formations worthy of the name of the mountain. It wasn’t difficult to find our way through the ledges. When we eventually popped out of the conifers into the small 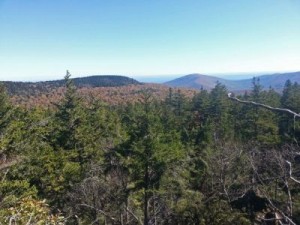 summit clearing on Rocky we met up with a 3500 Club group including some old friends just before they departed for the Fisherman’s path. After some greetings, they departed and we stuck around for lunch and some views from the nearby overlook. One of the enjoyable things about this route is being able to look back from each peak to see where we had been previously.

We had followed a good track between Rocky and Lone back in March that we wanted to replicate to avoid the thick stuff, but it didn’t quite work out as well as we had hoped. We hit some thick firs and that segment took us almost two hours, although it went fast because of some good conversation.
After another break on Lone and more nice views back in the direction we had come from, we headed for the Peekamoose-Table trail.

We looked around for a nice potential camping spot I had seen in March to see if it still looked good without a few feet of snow covering it, but it’s small and it may take some searching (or a GPPS coordinate) another day. 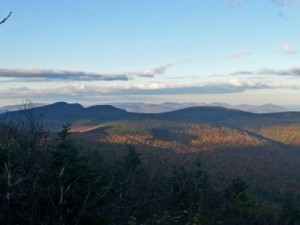 The travel between Lone and the Table-Peekamoose trail is more open than the thick forest on the other side of Lone, although it does thicken up just before reaching the trail. It was getting late so we made a quick side trip to the Table summit, then back to Peekamoose. The viewpoint near the Peekamoose summit is excellent, but we were losing daylight and hit the trail back to Peekamoose Road after a few photos.

Not far from Reconnoiter Rock I saw an animal take off like a flash about 50 feet to the right of the trail. My first impression was that I had seen my first bobcat, but it also could have been a coyote. It was so fast that I wasn’t certain even though I was looking right at it. Had I been expecting to see it, I might have been able to identify what it was. The rest of the hike was pleasant and uneventful, although we did finish with headlamps.