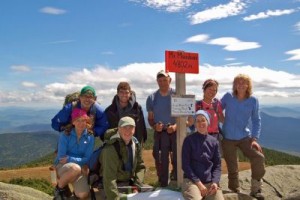 This was a great day for a hike to an open summit. Two of our group passed on the hike after one of them developed a bad blister the day before, but they thoughtfully met us at the trailhead at the end of the hike with some refreshments from a local brewery that they had just toured.

The rest of us (8) started from the Beaver Brook trailhead on Rte. 112 hoping for a scenic and less traveled route on the busy Labor Day weekend. Beaver Brook was a success on both counts.

The guidebooks are full of warnings about this trail and the trailhead signage has some colorful description of the dangers ahead. The first mile and change of the trail 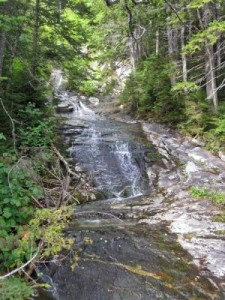 is alongside a very long series of beautiful cascades. A slip in some spots could have dire consequences, but the trail wasn’t that difficult. The warnings are definitely justified for flip-flop wearing, child toting families, but in dry weather the trail is tough but reasonable for the properly prepared.

The Beaver Brook Trail goes over a lot of steep smooth slab next to the cascades,
but wherever it is tricky there are wooden steps bolted into the rock or iron rebar handholds drilled in. It would be much more difficult when wet or icy. I’d recommend avoiding the tourist temptation to go over to the water for a close look unless you want to risk everything. After about a mile and a half the trail gets gentler near the Beaver Brook Shelter. The shelter is a real nice spot for a break no more than 100 yards off the trail and features the older and remodeled versions of “Berts Bath” side by side as well as signage containing pithy sayings and exhortations courtesy of the Dartmouth Outdoor Club.

We encountered a few other hikers along the trail, and a few more near the junction with the Asquam ridge trail, but not too many given the fine weather on Labor Day weekend. Past Asquam, the trail is much less steep, but with a few short steep and rough spots as it curves around the ridge above the Jobildunc Ravine. There were some nice views over the ravine and the first views towards the summit at a number of viewpoints. We noted the herdpath to Mt Blue as we passed it.

After passing the Benton Trail junction we emerged quickly above timberline with just under a half mile to go to the summit. It is a discontinuous timberline as there are several islands of small trees surrounded by the Alpine grasses below the summit. We could see a fair sized crowd as we approached the summit; many more people than we had seen on the way up Beaver Brook. As we reached the summit a bunch of people cleared away from the summit sign and we marched right up to touch the sign and pose for some pictures. Noticing a more or less continuous line of hikers arriving up the Gorge Brook Trail, we left the summit sign and found a nice spot for lunch on the rocks. 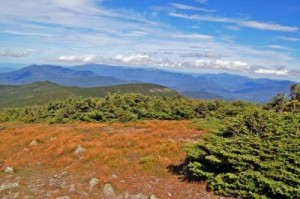 The skies were a very deep blue punctuated by a few wispy high clouds and we lingered more than we might have taking in the views and more photos. The Green Mountains in Vermont were very clear, and the Adirondacks were plainly visible beyond them.

When we finally did leave the summit we hiked back only as far as the herd path to Mt Blue and decided it must be worth a visit. The herd path was a little longer than we thought it would be (but not long) and lead through a view-less but beautiful forest to a summit area which had a couple of plastic bottles hanging from a tree containing a log book and pencil in one and what seemed to be a sort of geocache in the other.

The hike back to the trail head from Mount Blue went quickly. At the parking lot, someone had set up to provide some trail magic to passing thru-hikers.  The absent members of our group were also there waiting for us with some magic of their own (the previously mentioned refreshments). After a sip or two, we all headed for a nice meal at the Woodstock Inn.