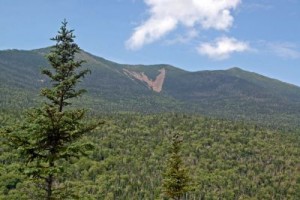 A smaller group of 6 hiked Owl’s Head from Lincoln Woods on day three of our White Mountains trip while the others opted for a relaxing day down in the valley.  Owl’s Head is the longest standard route to one of the New Hampshire 4000 footers, although we did cut a couple of miles off and avoid a tricky water crossing by bushwhacking both ways near Black Pond.

At Lincoln woods we were greeted by a ranger, or probably a former ranger now doing some volunteer work who regaled us with tales of past hiking glories (and of ticketing illegal campers in the most remote places).  He had some great stories, but this was going to be a long day and we had to get going.  He advised us that we would be coming out in the dark with our headlamps, but in we eventually finished the hike with over an hour of daylight to spare.

We followed the Lincoln Woods trail to the Black Pond Trail and took only about an hour to get to Black Pond, hardly noticing the time or miles pass as we chatted along the trail.  The rest of the day was considerably slower but still very enjoyable.  It rained lightly for a bit during that first part of the hike, but not enough for any rain to make it through the canopy.  It soon became a very nice day, although a bit humid at first.

From Black Pond we bypassed the major crossings of the Franconia and Lincoln brooks by bushwhacking to the Lincoln Brook Trail.  We set a compass bearing to the north-northwest  with the goal of hitting the Lincoln Brook (our “backstop”) trail a little 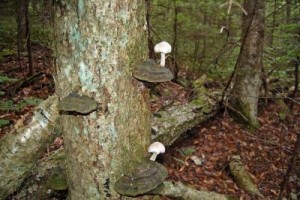 west of the crossing.  We thought we saw a faint herd path at times, but on our bearing there wasn’t much of anything to follow so we relied on the compass to keep us from wandering off course.  This is not the most common black pond bushwhack route and the woods were rather thick with hobblebush, striped maple and other undergrowth and it took over an hour.  Along the way we stopped for a nice photo break at a smurf condo complex.

Eventually we heard the water in the Lincoln Brook which got louder until we emerged down a steep slope onto the trail about a half mile west of the crossing. 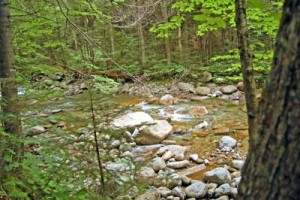 From there it was a straight forward hike to the base of the Owls Head slide with a few manageable crossings along the way.  We met several other groups, some of whom were on the way out from overnight backpacks and some who had stayed on the the trails from Lincoln Woods and were also heading for Owls Head.

Shortly before reaching the turnoff for the slide we came upon a considerable amount of clothing hanging in the trees to the left of the trail near the pitch down to the river. The herdpath to the slide was easy to spot as the trail was blocked at that point by a fallen birch and a decent sized cairn right in front of the birch.  In addition, a bunch of logs arranged as an arrow pointing off to the right clinched the deal. 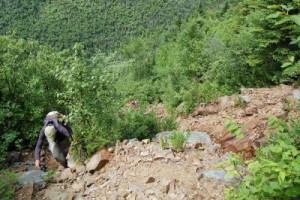 The Owl’s Head slide is reached very close to the trail and quickly begins a steep ascent.  What great fun!  You do have to take a lot of care not to kick down rocks as you climb (and be alert for rocks from above) and it is more treacherous when wet, but on this day it was a giant playground.  We experimented with different routes; some went left, some went right, at times we were able to go up the middle.  It was a nearly continuous scramble and some of the footing is a bit crumbly, but there were almost always good solid handholds on rocks, trees or roots when needed and the views back to the Franconia range are outstanding.

A short way up we met a guy coming down who told us the clothes we saw in the trees belonged to his friends and that they had gone up to the summit while he was only hiking partway for the views.

The slide part of the climb seemed to fly by, but it only accounts for roughly half of the ascent of Owl’s Head from the trail.  You get the sense that you are near the top when you emerge from the slide into continuous evergreen woods, but there is quite a bit of climbing left to go at that point.  Still it didn’t seem like too long before we emerged into the summit clearing.  This first clearing is actually the “former summit” but was a good place to stop for a snack.  From there to the most recently recognized “true” summit there is a pretty clear herd path, but it is muddled a bit by the many ancillary paths meandering around the flat top of the mountain.    It was about a quarter of a mile to the “new” summit which we found easily.

Shortly before finding the new summit, we saw a sock that someone had left in a tree near a bend in the herdpath.  Sunday must be laundry day in the Whites. 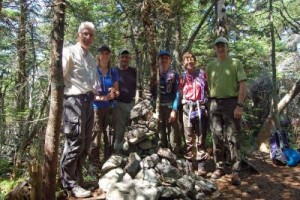 The new summit is currently marked by a rock cairn.  Someone had unfortunately carved “OH TOP” into a tree near the presumably unofficial cairn. Nearby there are glimpses though the woods of the views that would be to the west and to the east.  Perhaps there are better views from the summit in winter with deep enough snow cover or even summer outlooks, but we elected not search for them this time.

The hike down went faster than we expected given the steepness and we rested for a few moments upon reaching the trail.  One of our slower hikers generally holds a nice steady pace and he took the lead for most of the long hike out.

We considered possibly sticking to the trail where we could make better time than in the woods, but out that of all the people we had spoken with, only one had claimed to have gotten through the crossings dry.  Still we agreed to hike to the Lincoln Brook crossing and check it out.  It was about a half mile from that point to the crossing.  Along the way we passed a group that we had seen earlier.  A woman in the group had rolled her ankle and was hobbling along slowly.  She was still moving and her group seemed to have the situation in hand and had already sent someone ahead to Lincoln Woods to seek assistance so we kept moving.

The crossing itself didn’t look too bad, but just to the right of the trail was a clear herdpath heading almost due south and we all agreed to return to Black Pond rather than make the crossings.  We did set a southerly bearing on the compass which was helpful as we lost the herdpath for extended stretches a few times.  It tended to peter out at wet or boggy areas and wasn’t 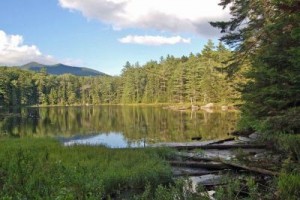 easy to pick back up, but we stayed on our bearing.  After a while we started and intentional lean to the left which brought us back to Black Pond.  After a stop for some views of the Bonds over Black pond, we enjoyed a nice brisk walk back to Lincoln Woods on the gentle railroad bed.  We took a little under 11 hours from start to finish.

I have heard a lot of people who are focused mainly on crossing peaks off a list complain that Owls Head is just one to endure.  I disagree.  This was a great hike with a little of everything…fast flat, map and compass whack, beautiful brook side trail, awesome slide climbing, great views  and a lovely treed summit.  No one segment of the hike seemed too long.   We’ll be doing this one again.