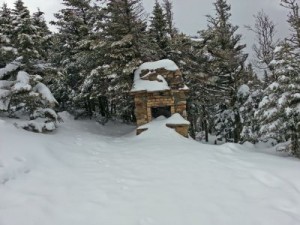 Hiked Starr King and Waumbek with David. It was one of the best rainy day hikes ever…partly because it didn’t rain. The snowshoe track was obvious, but it had a few inches of new snow and sleet covering it that had only just finished falling. It was a fairly warm day (but without rain) and snow balling on the snowshoes was an issue, but manageable. Thought there would be no views, but visibility was excellent under the clouds. 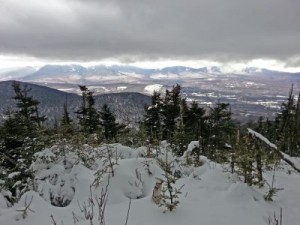 There were some interesting views of the ski trails at Bretton Woods under the dark clouds. The Bretton Woods slopes appeared to be in bright sunshine. Parts of the presidential range below the summits, but above timberline were visible as well. It was very windy on the summit of Starr King where there is a fireplace in the clearing.

We did our part to pack down the new snow onto the track, but a couple of young girls from Quebec came along barebooting behind us post-holing all the way and making quite a mess. C’est La vie.