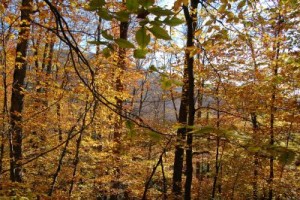 We hiked Halcott Mountain a beautiful fall day. For MK, this was #38; the next to last peak on his quest to earn his 3500 patch.

From the parking area we crossed the creek above the waterfall on the north branch of the Bushnellsville Creek. We continued through the cairn fields and then stayed on the north side of the next creek, paralleling it while climbing mainly towards the west-northwest.

We were on and off a faint herdpath for a while until losing it completely before reaching a Y-shaped junction of the main creek and another small stream that comes down from the ridge further to the right (north). We let this secondary stream steer us more towards the northwest and climbed steeply until we reached a spot where its ravine wasn’t cut as deep. From there we resumed a west bearing towards the ridge line.

Most of this route is a steep climb. Although it is one of the shorter hikes to a 3500 foot peak, it is by no means one of the easier ones. There is a lot of mossy slate lying flat against the hillside and concealed by the recently fallen leaves which led to a few surprises.

There were still nettles around, but the nettles had lost their mettle. Fortunately, there were enough blowdowns, beech whips and other opportunities to draw minor amounts of blood that we didn’t go home disappointed.

Along the ridge the climbing continued, but less steeply. Navigating towards the summit was fairly straight-forward; we just followed the height of land on roughly a south to southwest bearing. There is a herdpath right near the summit, but we found the canister before we found the herdpath. We enjoyed lunch on the summit, signed the logbook and noticed that some old friends had been there just 10 days before. We only saw one other hiker all day who reached the summit while we were eating lunch on a nearby rock and quickly left without signing the logbook.

For the return trip, we took a due east bearing and headed off the summit. It was pretty easy to stay near that line because the bearing was aimed right at the col between Balsam Mountain (one of the “other” Balsam Mountains) and Mt. Sherrill which was visible for much of the way down. This route off of the summit is very steep and we busied ourselves with finding the path of least resistance around blowdowns and various terrain features until we reached the creek.

We crossed the creek at a deep ravine spot that we had deliberately avoided on the way up. The opposite bank is steep, slippery and easily eroded. It was a bit of a struggle for one of the group who had become a little dehydrated (a reminder not to get complacent about hydration, even on a “short” hike), and we stopped for a short rest and a drink in the hemlock grove near the north bank of the stream before walking the rest of the way back to our cars.