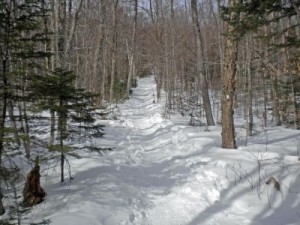 On a vacation day, I skied a solo loop from Pinkham Notch consisting primarily of Old Jackson Road (OJR), the Mount Washington Auto Road, and the Connie’s Way ski trail. I used waxless skis, no skins. Most of the route is not too steep and skins are not necessary, but with the firm conditions there were a couple of short sections on the OJR that were a bit of work to ascend.

It’s been a lean snow year (2012) and soft snow is hard to come by as of February. Old Jackson Road from Pinkham was firmly packed and bare-bootable if you stayed in the snowshoe track. For skiing, it’s a bit tricky to herringbone up the steep section because of the narrowness of the packed hiking trail, but it was an interesting way to gain over 600 feet in elevation. Shortly before the end of Old Jackson Road there is a cutoff shortcut to the Auto Road, but I stayed on the OJR trail to the end. I had to take my skis off for a couple of ledges and hiked the last couple of tenths of a mile past the Raymond Path and Nelson Crag trail junctions where the trail descends slightly from a high point of 2700 feet to the intersection with the auto road. There is a nice little evergreen forest just before reaching the end of OJR.

I met a fairly large group of hikers crossing back over the Auto Road after having visited Lowes Bald Spot. 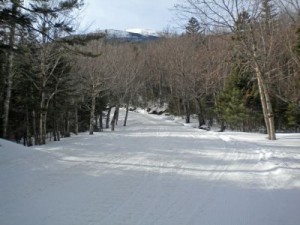 From that junction it is about 1.5 miles and 800 vertical feet down the Auto Road to the intersection with the Connie’s Way ski trail. The Auto Road was frozen hard in a washboard pattern from the snow cats used on the road but still provided a good long downhill ski to Connie’s Way. There was a narrow frozen track gouged down the middle of the road and I had to be careful to cut assertively across it on my turns or it had a habit of grabbing a ski and not letting it go. Although a very firm surface, the auto road is a gentle enough grade that it was possible to make halfway decent parallel turns despite the free heels. This section of the road between OJR and Connie’s Way is the only section that can be skied without a pass/permission from the Auto Road company (Auto Road, Snow coach, Great Glen ski properties). The rules may change over time, so check with them first if you want to ski more on the auto road…and do watch out for the snow coaches that take sightseers up to timberline in the winter.

Toward Connie’s Way there were some bare spots on the Auto Road that weren’t difficult to go around; everywhere else on this loop had full snow cover but not necessarily enough to cover up obstacles, especially on the ski trail heading back to Pinkham.

Connie’s Way was pretty tough. For the first mile and a half from the auto road there were some old frozen ski tracks, but not recently made and the snow was very hard, often with a breakable crust. There was enough snow for the deep postholes from one or more Moose that seemed to be everywhere, but not enough snow to cover the brush on the sides of the narrow trail, which made the skiing difficult. There wasn’t room to turn on the downhills or to make a wide enough “V” on steeper uphills without getting my skis hung up in brush. A few times when I opted to sidestep my tails broke through the crust which then wanted to hold them tight. I was alone and therefore skiing cautiously and I noticed it was taking a long time. A couple of times I took the skis off and walked over difficult sections but soon got to areas where I was clearly better off with the skis back on. I think I should have been more eager to get 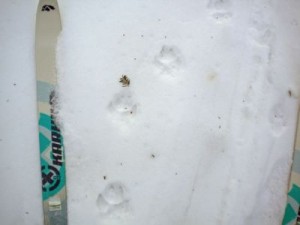 the skis off for short sections earlier.

In addition to the moose tracks, there were lots of other tracks following the ski trail, including more than one coyote. One set of tracks belonged to a healthy sized coyote based on the size of the footprints. I noticed some fur filled coyote scat at one point along the trail.

Connie’s Way passes through some interesting terrain, hemmed in under cliffs to the 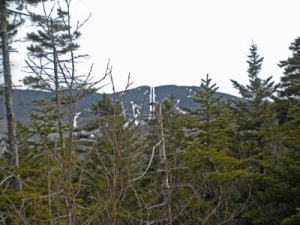 right in places and with an ever changing view of the Wildcat ski area frequently visible on the left. Once roughly abreast of the ski area the trail got a lot friendlier and the last mile and a half back to Pinkham was a much nicer ski. This route was about It will be nice to get out on some soft snow one of these days.