I led a Boy Scout Troop, including some of the older scouts and their leaders on a planned 3 night trek through the Presidential Range in New Hampshire. The itinerary was to include stays at the Mizpah Spring, Lakes of the Clouds, and Madison Spring huts covering 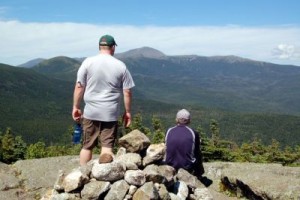 The first day we hiked to the Mizpah Hut via the Crawford Path from Route 302.

Arriving a little after lunch time the boys settled in and played cards while some of the adult leaders hiked over to Mount Jackson before dinner. The weather was very clear and the views north along our planned route from Mt Jackson were spectacular.

Day two featured a traverse along the ridgeline over Mt Pierce, Eisenhower and Monroe to the Lakes of the Clouds hut on the side of Mount Washington. The boys l 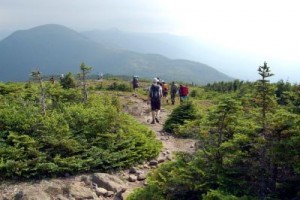 ed the way, stopping occasionally for their leaders to catch up. The weather was still nice, but hazier than the day before. Some of the boys went for a swim in the icy water of the lower lake before dinner. After a full dinner at the hut, they showed some of the other guests how to play “spoons”. The entire group enjoyed the hut food.

Day 3 dawned foggy and rainy and we hiked to the summit of Mt Washington immediately after breakfast. 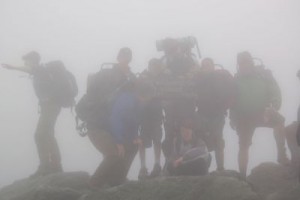 summit a bit behind schedule in zero visibility with winds already gusting to 50 mph.  With the weather forecast now adding a possibility of severe thunderstorms during the afternoon, we decided that hiking the exposed ridgeline to the Madison Spring Hut was best left for another trip. The scouts were included in the decision making discussion. An expensive, but comfortable stage ride to Pinkham Notch followed, along with a longish drive around to the Highland Center where the AMC was able to find room and switch our reservation from the Madison Springs hut.

This trip was planned well in advance and the route was highly anticipated, but the boys also learned a lesson about having to be willing to change plans when the conditions become unsafe. This can happen on any trip in the mountains and it is important to be flexible rather than becoming fixated on a goal or previous expectations. It is also important to know when and where are your best options for bailing in the case of dangerous conditions, which we did on this trip. This is especially important in an exposed environment such as the above timber line ridge of the Presidential Range where the relative shelter of the forest is often quite far away.

After a comfortable night at the Highland Center (which included their discovery of the basement game room), the scouts planned a day hike of Mount Madison in the morning as the consolation prize for the aborted ridge traverse to Madison. It was well worth it. We started at the Appalachia parking and hiked to the hut via Air Line which is a beautiful trail, well-maintained at its lower elevations and with great views on the exposed sections of the Durand Ridge.

For much of the day the skies were clear to partly cloudy and the summits were mostly in the clear, but as we neared the crossover to the hut we could see the rain shafts beneath the clouds gathering to our west. The group made a well-timed stop to eat their lunches in the hut, missing a heavy shower and getting to supplement their lunch with Lentil soup prepared by the Hut croo. 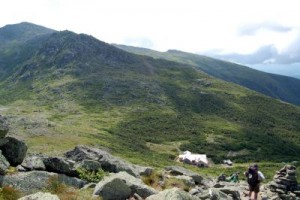 After lunch the troop scrambled up to the summit of Mount Madison. The weather had cleared nicely and the summits were cloud free, including Mt Washington. As we reached the summit of Mount Madison the clouds and fog moved back in, although the cloud base wasn’t far below us and we could still see downhill into the Great Gulf. Raingear was donned and we hiked back to the hut. It didn’t rain and we removed the raingear at the hut and cooled off before starting down via the Valley Way trail.

On the way down the clouds moved back in and it rained for a couple of hours. At one point the rain shower became a hailstorm for about 10 minutes, which everyone thought was actually pretty cool since it was not accompanied by any lightning. The hail was only pea sized, but for a short time it was heavy enough to sting a little.

The trip was a good learning experience for the boys, including the intense discussion and decision making they participated in about whether to bail from the summit of Mt Washington and also the need to patiently deal with a “crisis of confidence” on the part of one of the scouts on Mt Madison. The other boys took charge of encouraging and leading him to the summit of Mount Madison and in the end he was very pleased with himself that he had completed the hike and none the worse for the wear.

We set the trip up for the troop, provided the logistics and some direction and monitored safety, but the boys themselves had to make things happen. They learned a lot from this trip; probably more than they realized.