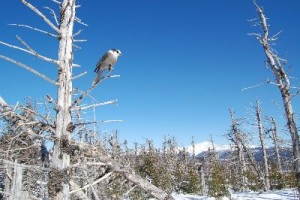 It was just Sean and I on this bluebird day and these were his first winter peaks. The weather was perfect with deep blue cloudless skies. Despite the forecast for windy conditions at the summits, the winds were rather tame.

Our route was to be a counter clockwise loop taking in Tom, Field, and maybe an out and back to Willey. We got a late start (a little after 10:30), and decided at the start that Willey wasn’t going to happen.

The Avalon trail from the Crawford depot up to the junction with the start of the A-Z trail was firmly packed and a fairly easy trek. When we stepped even slightly off the trail we would sink unexpectedly deeper into the snow, even with our snowshoes on. We wore snowshoes for the entire hike.

The A-Z trail from the Avalon junction up to the col between Tom and Field is much steeper after an initial descent to a stream crossing (which was buried deeply in snow on this day). On the short downhill section we met a couple who were poking around searching for a pole basket that had been swallowed up by the snow. We spoke briefly and they said that they were intending to hike to Zealand hut and back. 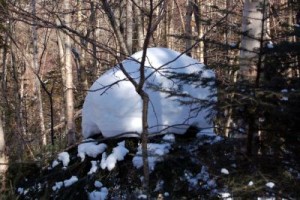 There is a lot of side hilling for a while on that  part of the A-Z and the wind had blown some snow onto the trail making for softer footing.  There were some
interesting sights along the way, including a foot sized hole through a snow bridge penetrating several feet to unfrozen water, a giant “snow mushroom”, and some silver dollar sized ice crystals forming on what looked like unfrozen water but was in reality clear ice. 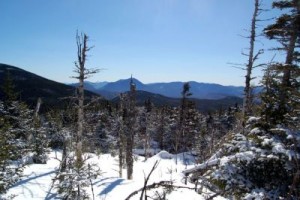 closely spaced balsams that were coated in powdery snow. We stopped for some photos on the southerly overlook with views toward Mt Carrigain and the Hancocks then continued until we reached a clearing near the summit where we had some lunch.  While we were eating, the gray jays in residence were not shy in approaching us looking for a handout. Sean enjoyed this and we took some photos and video of the panhandling birds.

We only met a handful of people for most of the day (until around Mt Avalon on the way back) and got to speak with most of them. It seemed that most were working a list.

We next went over to the true summit of Mount Tom and enjoyed the views towards North and South Twin and the Bonds before heading back to the A-Z trail. This part of the trip went very quickly down the packed trail, although we stopped briefly along the way where I pointed out to Sean an example of a spruce trap right next to the trail. Sean had never heard the term before and I poked my ski pole as far down into the tree as I could reach without hitting bottom to demonstrate the concept.

Back at the A-Z trail I asked Sean how he felt and if he wanted to go back. He said that he wanted to hike Field also, so we went right on A-Z for a short distance before turning left (south) at the junction with the Willey Range trail.

The Willey Range trail was well packed, but somewhat softer than what we had been on previously…at least the MSRs were a little quieter than they had been, but not much. A couple of the trail signs were down around the level our feet as we walked over the deep snow. We met a woman hiking the loop solo in the opposite direction who was carrying a sheet of plastic for sledding the descents.

After the final short steep climb to the summit and some time enjoying the views west toward the Bonds and Franconias, as well as northeast toward the Presidentials, we set off down the Avalon trail in search of some good butt sledding (aka glissading). There were a couple of good long runs that we both enjoyed. Using the snowshoes as rudders to steer was also fun.

We arrived back at the Highland Center at 3:30 (about 5 hours total time including several stops). Sean declared that the gray jays and the glissading really made the day a fun one.