We hiked Mount Jefferson and Mt Adams in the northern Presidential range on a very nice day. The weather was clear in the morning, trending toward partly cloudy in the afternoon and there was a slight haze by evening. The temperatures were relatively warm, probably in the 50’s above timberline and the breeze, although present, was not enough to keep us cool while hiking.

We started out from Jefferson Notch Road and hiked Mount Jefferson via the Caps Ridge Trail. At “only” 2700 feet of elevation… gain, this is the shortest route to the summit of Mount Jefferson. We then hiked to Mount Adams and finished the day at the Appalachia trail head on Route 2 near Randolph, NH.

We stopped at the first major viewpoint on the Caps Ridge Trail and took some photos of glacial potholes in the rock.

From that first Overlook on the Caps Ridge Trail it is pretty obvious what the “Caps” are:

Looking to the north, it was easy to see the “Castles” on the Castellated Ridge: 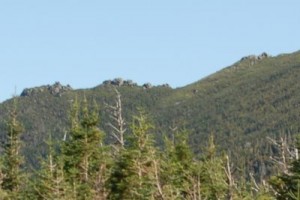 The morning was nice and clear, with just some cumulus showing to the west and the views were outstanding. There are a lot of nice views of the southern Presidentials on the way up. The Lakes of the Clouds hut and Mt Monroe are closest and most prominent until you climb high enough to see Mt Washington over Mt Clay.

A couple of spots on the Caps make for an interesting and steep scramble where consideration of hand and foot holds is important.

The trip up the summit cone of Mt Jefferson from Caps Ridge is a little deceiving as there are a few false summits before reaching the top. Once there, there are two prominent mini-cones in close proximity. The first one (the more westerly of the two) is the true summit. 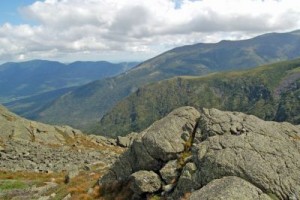 From Mount Jefferson, we hiked the Gulfside trail over towards Adams. The views of the ridges and ravines in nice weather are spectacular.

The trail markings up to the summit of Adams can be a bit confusing if you are not careful, but in clear weather the direction to Adams is rather obvious. We followed the Gulfside Trail to Lowe’s Path for the summit. There are nice views from the summit of Adams toward Mount Madison and Star Lake.

From the summit of Mount Adams, we then headed down to Appalachia/Route 2 via the Air Line Trail, bypassing the cutoff for the Madison Springs Hut. Air Line above timberline is an awesome trail and includes excellent views of King Ravine from the Durand Ridge.

Air Line goes all the way to Appalachia, but we left it at upper Bruin and moved over to the Valley Way Trail for the rest of the descent. Upper Bruin is a stark transition from Airline which is dry and open above timberline to that point, into a wet, steep, narrow trail through the trees. After a couple of hundred feet of descent Upper Bruin emerges onto Valley Way in the vicinity of a tent site maintained by the US Forest Service (WMNF).

The top of Valley Way begins near the Madison Springs hut and is in the trees up to the hut.  In poor weather it is the best route down from the hut.  Further down below the tent site it has options for taking the parallel Brookside Trail along the scenic Synder Brook. We stayed on Valley Way and enjoyed some long stretches of trail running down towards Appalachia.